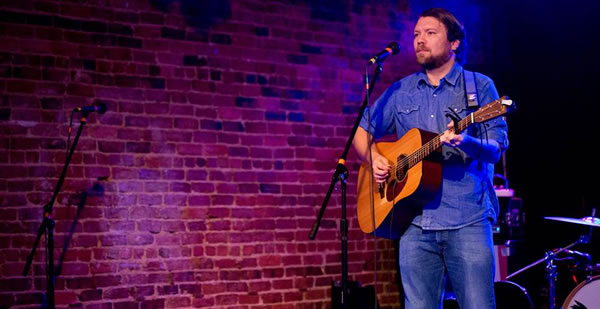 Local music scenes are riddled with the corpses of flashy wannabes and oblivious hacks. They’ve seen their share of talentless teen queens, gimmick bands and cynical dinosaurs. And in every scene you’ll never stop hearing back-handed compliments about the envied ghosts of those bands who outgrew the scene and made it on to the next level.

But in some scenes there is an artist of integrity and imagination, a songwriter’s songwriter, a person who encourages and inspires younger artists but continues to put out relevant material that shows artistry and promise. A prolific person who is not only driven by the pure love of music, but also the intense need to make and perform it with as many other people as possible present, and preferably involved. This person is the glue that holds a scene together. This person is the true believer. Adam Lawson is this person in the East Tennessee folk music scene.

Quietly and constantly Lawson has built solid relationships with the area’s best artists and venues and earned their respect. He has overcome heartbreak and adversity and graciously showed up again and again to give his all on stage for crowds of all sizes, night after night and year after year.

Lawson’s songs evoke a poignant melancholy that smacks of the influences he’s proud to claim: Elliott Smith, Townes Van Zandt and his good friend, the late local legend Allun Cormier. The songs sound like beer and cigarette smoke and rural highways that lead to ramshackle roadhouses. They sound like a cry to a star-filled sky, a dreamer’s diary, the words of the last romantic.

They are Americana songs with twang and grit and that high lonesome sound, but the lyrics are less confined to Southern fables than many artists under the country banner. They access certain cosmic and universal threads of consciousness in a dreamy poetic haze that is not concerned with linear narrative or lists of interests and activities that prove him Southern. He’s a true Southern man, alright, with chivalry and manners, a healthy respect for his elders and influences, but he’s a southerner like Faulkner is: he offers a unique and challenging perspective on life without seeming like he hates it.

Adam Lawson seems to love life like its a girl he can’t help but love even though she does him wrong. He loves it because he’s been close enough to the brink to understand its superiority to the alternative. He loves life because there is music in it.